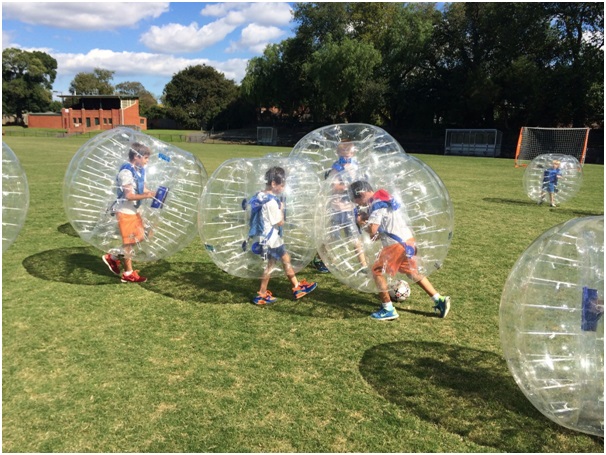 Bubble soccer is a fun game that people across the globe loves to play. Bubble Soccer was started as a fun way to play soccer with your friends and family. But now it has become one of the biggest and enjoyable sensations in recreational sports in the last ten years.

What Is Bubble Soccer?

Bubble soccer, also known as zorb soccer, is the sport of playing football while being encased in an inflated bubble. The bubble covers half of the player’s body, and they have to play soccer.

Bubble soccer is traditionally played with five players in each team, but as long as you have even numbers of people in your team, you can enjoy this game. Bubble soccer session makes a great way to celebrate a birthday, team building event, or other special events.

Making people wonder where bubble soccer came from and what is the history of this awesome game. Bubble Soccer was created in Norway, and it is attributed to be a Norwegian invention.

It was created in 2011 when Henrik Elvestad and Johan Golden wanted to give a twist to the traditional football. Norway then broadcasted the game on a variety show, since then, bubble soccer began to gain popularity and recognition.

The creators never expected this spectacular and funny game to be popular around the world. In no time bubble, soccer became a rage, and people from all the places loved it.

After the video of the bubble soccer game went viral, it reached Australia in late 2013. Initially, this game had to face quite a few problems due to the unavailability of high-quality equipment and lack of standardisation& proper management.

Ultimate Bubble Soccer is the best company in Australia that organises the bubble soccer game since 2014. They started organising bubble soccer in Melbourne as the game existed in the mainstream of Melbourne from the beginning.

People of Melbourne loved playing bubble soccer. Be it birthdays, team building events, hens, and bachelor parties, any events without a session of bubble soccer were considered incomplete.

After being successful in Melbourne, the Ultimate Bubble Soccer team took their business to Sydney. No doubt, the Sydney people also love bubble soccer.

Nowadays, Bubble soccer is a popular and fun sport across Australia. It has become an entertaining outdoor activity for family, friends, and corporate events for team building.

Bubble Soccer is a perfect game for people of any age, and you will have everyone laughing and sweating by the end of the day. Most importantly, you can play this game even if you are not competitive, but you love having a good time.

If you are in Sydney or Melbourne, you wouldn’t want to miss a chance to try this fantastic game. Try Bubble Soccer with Ultimate Bubble Soccer, if you want to do some sports and have immense fun at the same time.`