Even in the current times, quite a few basketball coaches are using obsolete methods to train the beginners. Low dribbling is one of the key aspects in basketball that the coaches want the players to master. If in the early years of training, the players don’t dribble low then it becomes their habit and it becomes even more difficult to let go.

The crossover cone is a device which the trainers use to train kids. It has a traditional orange cone with an arch and the kids are supposed to be as low as the arch and dribble through it. If they are not low enough then they will not be able to dribble without making the cone fall. Practicing with this device allows the coaches to ensure good basketball habits so, as they students train further, they get better and better with the strong foundation.

Staying low while dribbling requires a lot of practice and hard work. The precision crossover cone is a one of its kind devices which focuses on low dribbling and speed control of the players. While low dribbling, maintaining the speed can also be tough. However, the crossover cone allows the kids to be precise, and it makes sure that they have a maintained speed.

Some of the benefits of the precision crossover cone are as follow:

When the kids begin to play basketball, they are unable to dribble as low as they should, this can become a bad habit in the future. To prevent this bad habit, the crossover cone makes sure that the kids are dribbling low and through the arch of the cone. Initially, they will be seen knocking out the cone but later on with practice, they will get better and better and will be seen dribbling in the ideal way.

Ball turnover depends upon lack of good dribbling. If you dribble good, have a good speed and also have control on the ball then it is not likely that the ball will go to the hands of the opponents. However, if the dribbling is not good, the opponents will have a benefit and the ball turnover will increase. Keeping that in mind, the crossover cone allows the kids to dribble lo, have control on their speed and even have a good balance. With all these things, the players are able to decrease ball turnover.

Why is it necessary to use devices while training for basketball?

Training for basketball is changing day by day, new and improved devices are introduced with which people improve their skills. With better skills of the players, the obsolete training methods are not used much but the newer methods are welcomed to maintain a good game.

Working of the Crossover Cone

The crossover cone works really well in training the kids to dribble because it forces the kids to bend down and then dribble the ball, if they don’t do so, the cone is knocked out which means that they are not doing well. With the help of the crossover cone a posture of 90 degrees is achieved which is great for dribbling and decreasing ball turnover. 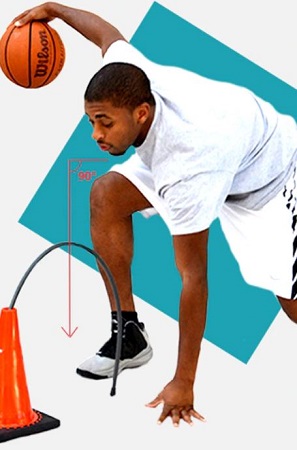 The precision crossover cone is recommended because it is a modern way of enhancing basketball skills of various players. Children learn to dribble low at a young age with which they keep dribbling low for as long as they play basketball. It becomes a good habit and also helps them improve their hand ball skills. If you are also looking to train your son with some fantastic basketball skills then get your hands on this device and ensure good basketball playing habits.